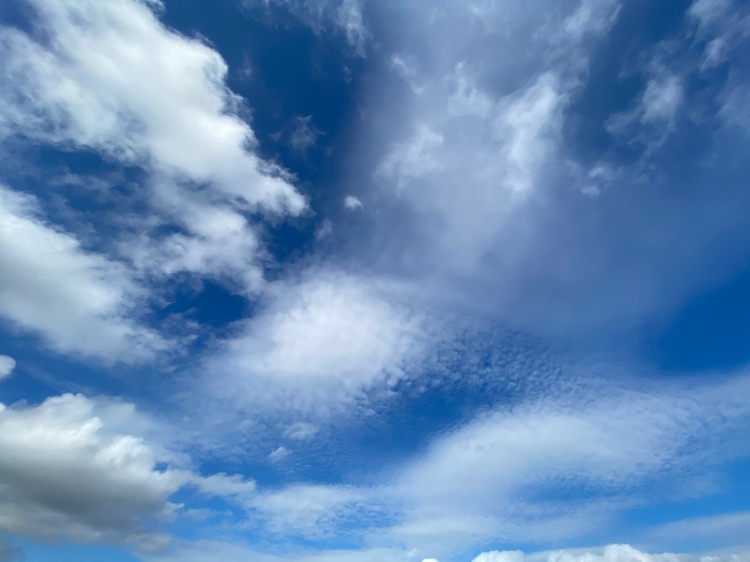 I’ve been photographing the sky every day since we went into lockdown.

There’s a selection of images below, and you can see them all on my Sky News website. 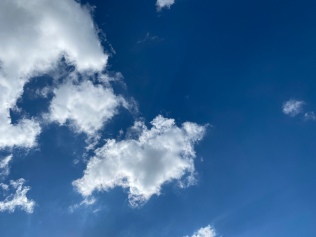 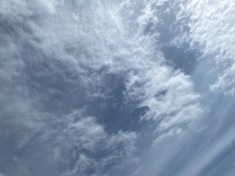 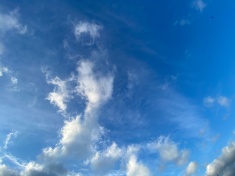 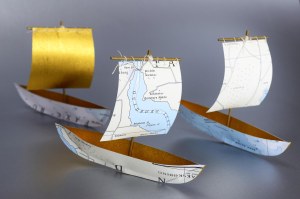 On Saturday 9 and Sunday 10 Sept, Cockwood Artists will be exhibiting in Cockwood Village Hall as part of Devon Open Studios.

The paper art I’ll be showing this year includes my new Viking boats which are created using nautical charts and gold paper. I’ll also have Japanese anemones and collections of tiny envelopes. 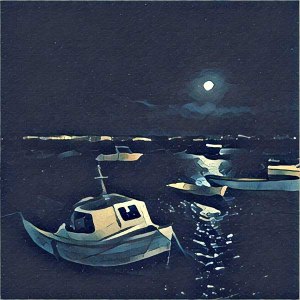 This year, I’ll also be exhibiting some of my iPhoneography images on canvas and selling cards with these images.

Tony Bird will be showing his watercolours which include local scenes as well as the Italian and French landscape.

The exhibition is free and is open from 11am to 6pm both days. There will be tea, coffee and homemade cakes for sale, and the Serenoa String Quartet will be playing at 2pm on the Sunday. Do drop by and say hello.

I’m exhibiting during Devon Open Studios, along with watercolorist Tony Bird. As well as the exhibition of art, there will be tea, coffee and homemade cake available. On the Sunday afternoon at 2pm, the Serenoa String Quartet will be playing. 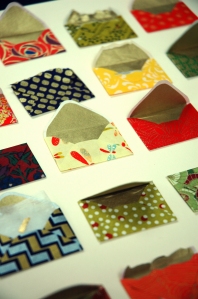 I’ve been continuing my work on White Feather Letters and what they represented, how people’s attitudes changed during the First World War, and asking what would happen if we were in a similar situation today.

I’m taking part in Devon Open Studios again this year. Tony Bird and I will be exhibiting at Cockwood Village Hall on Saturday 12 and Sunday 13 September from 11am to 6pm.

I’ve been experimenting with ideas around white feather letters sent during World War One. I’ve made some paper feathers and I’m really pleased with how they turned out. I started creating an installation at last year’s open studios and this year you can see more.
As well as the chance to chat to the artists and see the exhibition, there will be tea, coffee and delicious homemade cakes. On Sunday at 2pm, the Serenoa String Quartet will be playing 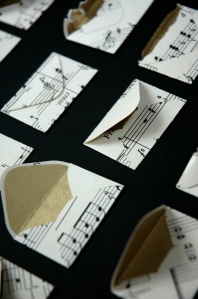 Cockwood Village Hall is just off the A379 between Exeter and Dawlish and the postcode is EX6 8NU. It’s close to Starcross and Dawlish Warren. There’s on-street parking, and if you want to make a little more of your visit, there are two great pubs – the Ship and the Anchor, and we’re on the coastal footpath.

I’m taking part in Devon Open Studios again this year. I’m exhibiting with watercolorist Tony Bird. We’ll be at Cockwood Village Hall EX6 8NU on Sat 13 and Sun 14 September from 11am to 6pm.

As well as a chance to meet the artists and see the exhibition, there will be tea, coffee and delicious homemade cakes. On Sunday at 2pm, the Serenoa String Quartet will be playing.

I’ll be showing a range of work including poppies and Japanese anemones. 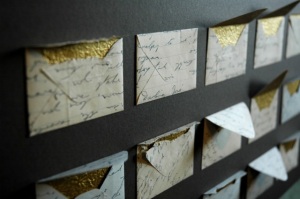 I’m exhibiting during Devon Open Studios on Saturday 14 and Sunday 15 September at Cockwood Village Hall (near Starcross and Dawlish), Devon. Cockwood is a scenic village on the Exe Estuary and there are two pubs where you can get a nice lunch or afternoon drink. I’m showing my work with watercolorist Tony Bird who paints local scenes as well as Norfolk, Italy and France.

We’ll be serving Fairtrade tea, coffee and homemade cakes, and on Sunday 15th, the Serenoa String Quartet will be playing at 2.00.

If you’d like to see our work, do come along and have a chat to find out more about what we do.

Directions to Cockwood Village Hall EX6 8NU: From the A379, turn onto the bridge at Cockwood Harbour, near Starcross. Take the first right before the Anchor Inn. The Village Hall is on the left before the Ship Inn. There is on street parking, and Cockwood is on the No 2 bus route. 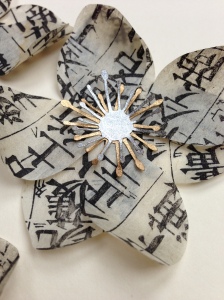 Some of my Japanese Anemones will be shown as part of The Art and Soul of Paper, an exhibition of 21st century paper artworks to embody the essence of the Japanese papermaking heritage.

The event takes place in Norwich from 11 March to 20 April and includes three paper exhibitions, two artist talks and a workshop in Papermaking from Plants.

It is organised by The International Association of Hand Papermakers and Paper Artists to coincide with Washi: the Art of Japanese Papermaking, a symposium hosted by Norwich University College of the Arts.

My work will be exhibited at Mandells Gallery, Elm Hill, Norwich from 11 March to 6 April.

Some time ago, a friend gave me an old Japanese book which had been damaged by insects. She thought it would be something I could use in my work. I kept the book for over a year before I eventually decided what to make with it first. I love the way that Japanese anemones move in the wind and I decided to make something inspired by them, and it suddenly struck me that this old book was the perfect thing to use.

I used one of the flowers  and pulled it apart to see how the petals are formed. Then I made a number of templates so that all the paper flowers would be slightly different. The petals are hand cut and the stamens are laser cut from a hand drawn template. 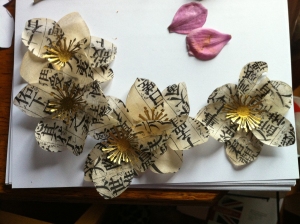 The stamens here are made from gold paper and I’ve also been experimenting with some silver ones.

The final pieces will be framed with polished black frames, hinting at the Japanese style.

This installation at the Exeter Northcott is made up of a thousand poppies created from copies of love letters written during World War II.

Some of the letters were written by an aircraft engineer in Southampton to his girlfriend, who later became his wife. He wrote to her two or three times a week for over five years.

Another set of letters was written by an American GI to a WREN but their story didn’t have such a happy ending – a telegram from her father suggests his disapproval of the relationship.

Other letters were kindly loaned by local people in response to a request through the local media. During my Devon Open Studios weekend in September, people brought family letters which helped to create the final installation.

I’ve been creating the work in my head for a long time. It’s made in response to the space at the Northcott specially for the month of November, and inspired by these letters which were written at a time of great uncertainty and heightened emotions.

Putting together the piece was a complicated process. Because it’s so tall (2.7 metres), I had to make it horizontally, and because of the shape of the niche where it’s hanging, the only practical way to construct it was upside down. I’d worked out the curve of the spiral in advance and created a plan for each layer, but my ideas remained fluid and I was constantly tweaking and recalculating as the shape developed.

Rosy Seal was artist’s assistant for this project and assembled lots of the poppies. Several people helped with hanging the work, including the tech crew at the Northcott to whom I’m very grateful.

You can see the installation in the foyer at Exeter Northcott Theatre until the end of November 2012. 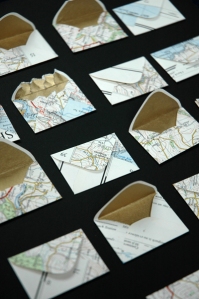 I’m taking part in Devon Open Studios on Saturday 8 and Sunday 9 September. Our exhibition is at Cockwood Village Hall EX6 8NU between 11am and 6pm each day. Also taking part in the exhibition are watercolourist Tony Bird and photographer Jane Hirst. We’ll be serving fairtrade tea & coffee and delicious homemade cakes.

On the Sunday, the Serenoa String Quartet will be playing at 2pm, so do come along to see some art, hear some music and eat some cake.

I’m also inviting people to bring their old love letters! I’d like people who have love letters written when the couple was separated by war or conflict to bring them along as part of a new piece of art I’m making. You can read more here.

Directions: From the A397, turn onto the bridge at Cockwood harbour, near Starcross. Take the first right before the Anchor Inn. The Village Hall is on the left, before the Ship Inn. There is on street parking, and the venue is on the number 2 bus route.